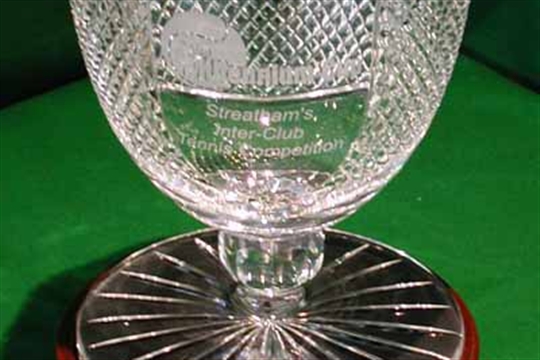 First up were the singles matches and we were very pleased that two new members were representing the club.  Stephane Legrand scored a swift and decisive win (6-1, 6-2) but Imo Clowes decided to take her time, playing a 3 setter (including one that went to 8-6 due to neither player realising that a tie-break would have sufficed!)(8 - 6, 6 - 7, 10 - 6)  Thanks to Kate Sheehy for guiding them through the tie-break!.  The junior boys match looked even on paper, but Zac Lavender, following in his dad's footsteps as a brilliant Millennium competitor played his socks off, beating Oliver Sinatra 6-1, 6-1.  Our youngest looking ever, lady vet, Kate Sheehy, played an elegant game, winning 6-1, 6-2   Keith Lavender played in his usual canny and intelligent game, beating his opponent 6-1, 6-2.  Viola Rebora made her Millennium Cup debut against a schoolmate who again, looked an even match beforehand but Viola didn't drop a game throughout the match. Next came the doubles, where Juliet Griffiths and Dilwen Roberts put their doubles training by Luka to good effect, playing a solid, no-nonsense game, beating their opponents 6 -1, 6-1.  The men's pair, Tom Fellows and Peter Bradley won the first set easily, had a little wobble in the second, but rallied again to win 6-3, 1-6, 6-2.    Finally, the mixed doubles pair Ellen Hoyle and Chris Williams took to the court for the final match and even though Telford had the match in the bag, still scored a great 6-3, 6-2 victory.

With only 2 sets dropped, this was a decisive win in our Millennium Cup campaign.  The scores make it look like it was easy, but in fact there were many, many deuce games where we just managed to get the crucial points.

More importantly, in the Millennium Cup spirit, it was a good-natured, fun event with Woodfield Grove taking their loss very graciously!

Well done and thank you to all!

Back to all news
Back to top